Oliver! as Oliver Twist
In Search of the Castaways as Robert Grant

Keith Hamshere is a former child actor and stills photographer.

Born in Illford, Essex in 1946, Hamshere began his career as a child actor, famously creating the lead role in Oliver!. However, he later became intrigued by the idea of stills photography and left acting, making his photography debut with Battle of Britain in 1969. Hamshere would go on to photograph many high-profile films, including Clash of the Titans and several entries in the James Bond and. Star Wars series.

Hamshere originated the part of Oliver Twist in Lionel Bart's Oliver!, which involved several group numbers and and a solo. He also sang the song "Enjoy It" in In Search of the Castaways. 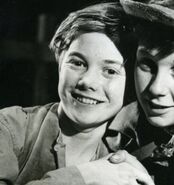 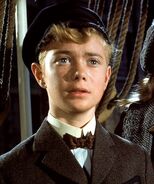 Robert Grant as In Search of the Castaways.
Add a photo to this gallery
Retrieved from "https://goldenthroats.fandom.com/wiki/Keith_Hamshere?oldid=52297"
Community content is available under CC-BY-SA unless otherwise noted.