June Havoc was an actress and singer.

Born Ellen June Hovick in Vancouver, Canada, she worked as a child vaudeville performer and later actress under the tutelage of her mother, before eloping in 1928 and striking out on her own, making her Broadway debut in 1936's Forbidden Melody.

Havoc also appeared in such films as When My Baby Smiles At Me, The Story of Molly X and A Return to Salem's Lot as well as appearing in General Hospital and writing the play Marathon '33.

Havoc made her stage musical debut in A Connecticut Yankee and originated the roles of Gladys Bumps in Pal Joey and Montana in Mexican Hayride. She also played Mrs. Lovett in Sweeney Todd: The Demon Barber of Fleet Street and Miss Hannigan in Annie.

Havoc sang in several of her film roles, beginning with Four Jacks and a Jill (where she performed the solo "I Haven't a Thing to Wear") and several times in the musical film Hello Frisco, Hello and Hi Diddle Diddle (which featured the solos "I Loved You Too Little, Too Late" and "The Man With the Big Sombrero.") 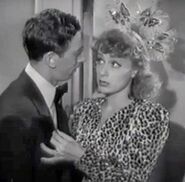 Opal in Four Jacks and a Jill. 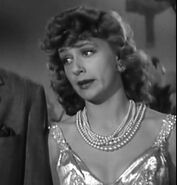 Roxey Rochelle in Sing Your Worries Away. 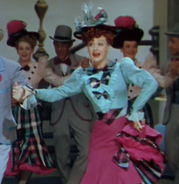 Lillian Colman in Casanova in Burlesque.
Add a photo to this gallery
Retrieved from "https://goldenthroats.fandom.com/wiki/June_Havoc?oldid=49186"
Community content is available under CC-BY-SA unless otherwise noted.