Born in Guildford, Surrey, Cole made her screen debut as the spoilt Veruca Salt in Willy Wonka & the Chocolate Factory. She later appeared in television series Angels, Van Der Valk and Poldark as well as films including That Lucky Touch and Camille.

As well as her screen roles, Cole also appeared as Titania in A Midsummer Night's Dream and later primarily worked as a voiceover artist, performing for documentaries and advertisements.

Cole made her sole singing appearance in her first film, Willy Wonka & the Chocolate Factory, declaring "I Want It Now!" 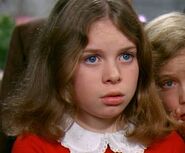