Jonathan Adams was an English actor.

Born in Northampton, England, Adams was inspired to become an actor and an artist after viewing The Cabinet of Dr. Caligari. He became an artist and later an art teacher, but also put on popular one man shows, acting, singing, playing piano and often writing his own pieces. His most popular show was Jonathan Adams' Happy Hour.

Additionally, Adams was often seen as a character actor on British television, including in Jesus of Nazareth and Yes, Prime Minister, as well as several film appearances.

Adams made a considerable contribution to musical theatre through his connection to The Rocky Horror Show, in which he originated the role of The Criminologist. When the show was adapted into a film; The Rocky Horror Picture Show, he took on the larger role of Dr. Everett Von Scott.

He later appeared in the original cast of Cameron Mackintosh's Tom Foolery, as several different characters, and as Warner in the musical Metropolis. 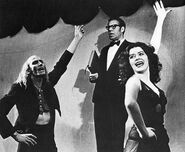 Riff Raff, The Criminologist and Magenta in The Rocky Horror Show.

Dr. Everett Von Scott in The Rocky Horror Picture Show.
Add a photo to this gallery
Retrieved from "https://goldenthroats.fandom.com/wiki/Jonathan_Adams?oldid=51996"
Community content is available under CC-BY-SA unless otherwise noted.