Pirates of the Caribbean: The Curse of the Black Pearl as Captain Jack Sparrow
Sweeney Todd: The Demon Barber of Fleet Street as Benjamin Barker/Sweeney Todd
Into the Woods as Wolf

Depp has performed on the soundtrack for several films, usually as a guitarist, but has on ocassion been a vocalist as well. In Pirates of the Caribbean: The Curse of the Black Pearl, he and Keira Knightley drunkenly sing the drinking song "A Pirate's Life for Me", which is reprised over the series.

Depp's first major singing role was in another of his collaborations with Tim Burton, portraying the lead in Sweeney Todd: The Demon Barber of Fleet Street. Depp was cast for his acting, rather than singing ability, being of a different vocal range and considerably younger than actors who have played the part in the past.

Depp made his next appearance in a musical in 2014 in Into the Woods (again by Stephen Sondheim) in which he played the Wolf.

Pirates of the Caribbean: The Curse of the Black Pearl (2003)

Captain Jack Sparrow in Pirates of the Caribbean: The Curse of the Black Pearl. 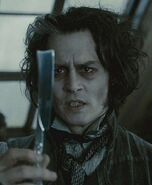 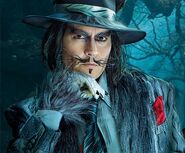 Wolf in Into the Woods.
Community content is available under CC-BY-SA unless otherwise noted.
Advertisement