John Mills was an English actor.

Born Lewis Mills in North Elmham, Norfolk, Mills made his professional stage acting debut in 1929 and his first film appearance in 1932's The Midshipmaid. He would often play heroic British characters over the next few years, including Pip in Great Expectations and Scott of the Antarctic before winning an Academy Award for his role in Ryan's Daughter.

Mills also appeared on a number of occasions on television (notably playing the lead in Quatermass) and stage, including Of Mice and Men and Pygmalion. He was knighted for his services to acting in 1976 and daughters Juliet and Hayley Mills followed him into the profession.

Mills sang in a mixture of stage and screen roles, beginning with stage roles in Cavalcade and the revue Floodlight, before a number of screen roles, singing a lullaby in The Baby and the Battleship, a Christmas carol with his onscreen family in Swiss Family Robinson and playing Field Marshal Haig in the satirical Oh! What a Lovely War.

Mills returned to stage musicals with The Good Companions in 1974 and appeared in the original cast of the musical Goodbye, Mr. Chips. One of his final roles came playing the nostalgic theatre cat Gus in the filmed production of Cats.

The Good Companions (1974)(originated the role) 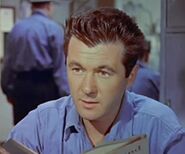 Puncher Roberts in The Baby and the Battleship.

Jess Oakroyd in The Good Companions.

Gus in Cats.
Add a photo to this gallery
Retrieved from "https://goldenthroats.fandom.com/wiki/John_Mills?oldid=48863"
Community content is available under CC-BY-SA unless otherwise noted.