John McMartin is an American actor.

Born in Warsaw, Indiana, McMartin made his professional theatre debut in Little Mary Sunshine and received a Tony Award nomination for his role as Oscar in Sweet Charity. Whilst best known for musical roles, McMartin appeared in a wide variety of stage plays, including Artist Descending a Staircase by Tom Stoppard and as Alceste in The Misanthrope.

McMartin also made several guest appearances on television, on The Golden Girls, Cheers and its spin-off Frasier (playing different characters). In 2011 he made a notable appearance as Thomas Jefferson in A Free Man of Color.

McMartin has a musical career spanning decades, beginning with originating roles in Little Mary Sunshine (winning a Theatre World Award) and Pleasures and Palaces, before making his career breakthrough as Oscar Lindquist in both the musicaland the film Sweet Charity.

McMartin would go on to appear in a number of hit musicals, originating the role of Benjamin Stone in Follies and Uncle Willie in High Society. He also appeared in later revivals of classic shows including Show Boat and Anything Goes.

The Conquering Hero (1961)(originated the role)

Pleasures and Palaces (1965)(originated the role) 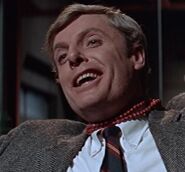 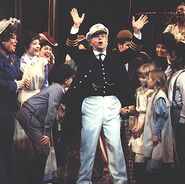 Claire Zachanassian and Anton Schell in The Visit.

The Narrator in Into the Woods.

Norman Vincent Peale in Grey Gardens.
Add a photo to this gallery
Retrieved from "https://goldenthroats.fandom.com/wiki/John_McMartin?oldid=49916"
Community content is available under CC-BY-SA unless otherwise noted.