John Fiedler was an American actor.

Born in Platteville, Wisconsin, Fiedler served in the United States Navy before beginning his acting career on radio and making his film debut as Juror #2 in 12 Angry Men. Fiedler was a prolific television actor, making appearances in such series as the original Star Trek, Gunsmoke and The Bob Newhart Show.

Fiedler served many years as the voice of Piglet in the animated films based on A.A. Milne's Winnie the Pooh books, as well as frequently voicing characters for Disney in films including Robin Hood and The Emperor's New Groove.

Fiedler sang a number of times onscreen, usually in the role of Piglet in the Winnie the Pooh series. This began with group songs such as Mind Over Matter in Winnie the Pooh and the Honey Tree to solos ("I Am Not Afraid" from Boo to You Too! Winnie the Pooh) and duets ("The More It Snows (Tiddely-Pom)" ) from Piglet's Big Movie.

Winnie the Pooh and the Honey Tree(1966) 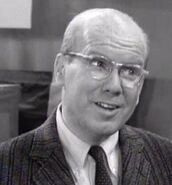 George G. Cheever in The Many Loves of Dobie Gillis. 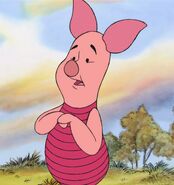 Piglet in The Tigger Movie.
Add a photo to this gallery
Retrieved from "https://goldenthroats.fandom.com/wiki/John_Fiedler?oldid=46324"
Community content is available under CC-BY-SA unless otherwise noted.