Isle of Forgotten Sins as Mike Clancy
A Funny Thing Happened on the Way to the Forum as Marcus Lycus (original Broadway cast)
Red Zone Cuba as Mr. Wilson

John Carradine was an American actor.

Born in Greenwich Village, Carradine tried his hand at sculpting and painting before deciding acting was his true calling, and, through mutual friend John Barrymore, began working for Cecil B. DeMille, first as a set designer, later doing voiceovers. He also worked as part of John Ford's stock company in such films as The Grapes of Wrath and The Man Who Shot Liberty Valance.

As well as touring with his own theatre company, Carradine spent the Forties making a name in horror sequels playing Count Dracula. He became one of the most prolific actors of all time, including film and television roles.

He appeared in Peggy Sue Got Married shortly before his death from multiple organ failure in 1988. His sons David, Robert and Keith all went on to successful acting careers.

Though one of the most prolific actors of all time, Carradine only sang a few times; the first being in 1943 in Isle of Forgotten Sins.

In 1962 he was hired to played the seedy brothel owner Marcus Lycus in A Funny Thing Happened on the Way to the Forum, who has several group numbers and the piece "The House of Marcus Lycus", in which he shows off his "merchandise" to Pseudolus and Hero.

He gave his final singing performance singing the theme tune to Red Zone Cuba which he starred in as Mr. Wilson. 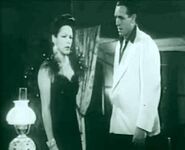 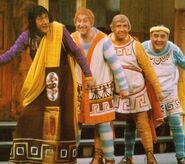 Marcus Lycus in A Funny Thing Happened on the Way to the Forum. 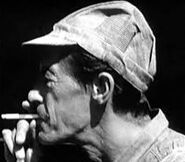 Mr. Wilson in Red Zone Cuba.
Add a photo to this gallery
Retrieved from "https://goldenthroats.fandom.com/wiki/John_Carradine?oldid=45972"
Community content is available under CC-BY-SA unless otherwise noted.