Die Fledermaus as Alfredo
Thomas and the King as Cardinal Rossini (original cast)
Joseph and the Amazing Technicolor Dreamcoat as Judah
Sweeney Todd: The Demon Barber of Fleet Street as Benjamin Barker/Sweeney Todd
Call Me Madam as Senator Gallagher
Gigi as Manuel/Maitre Du Fresne/Telephone Installer
The Phantom of the Opera as Ubaldo Piangi (original London cast)
The King and I

John Aron was an Australian actor.

Born John Michael Heffernan, he was primarily a stage actor but also appeared in several television series including The Emigrants and The Troubleshooters, as well as being a dancer in Labyrinth.

Making his operatic debut in the Australian Opera company's production of Die Fledermaus, Aron went on to appear in multiple productions, including as Pirelli in the London production of Sweeney Todd: The Demon Barber of Fleet Street and as the original Piangi in The Phantom of the Opera.

Thomas and the King (1975)(originated the role)

Joseph and the Amazing Technicolor Dreamcoat (1978)

The Phantom of the Opera (1986)(originated the role) 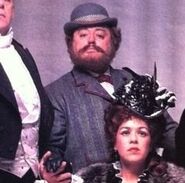 Ubaldo Piangi in The Phantom of the Opera.
Add a photo to this gallery
Retrieved from "https://goldenthroats.fandom.com/wiki/John_Aron?oldid=53538"
Community content is available under CC-BY-SA unless otherwise noted.