Joey Faye was an American actor and comedian.

Born Joseph Palladino in New York City, he became a comedian and vaudevillian as well as an onscreen performer, making his film debut in 1948 and appearing in such films as Hear Me Good, Diary of a Bachelor and Once Upon a Time in America. Faye also appeared in recurring roles in the television series Target: The Corrupters, Mack & Myer for Hire and variety shows like The Red Skelton Hour and 'Make Room for Daddy.

Despite mostly appearing as a comedian, Faye had a large number of musical roles to his name, including Goya in The Duchess Misbehaves, Mr. Pontdue in High Button Shoes and The Professor in The Amazing Adele. He also olayed both Benny Southstreet and Nicely-Nicely Johnson in Guys and Dolls, Sancho Panza in Man of La Mancha and Louis Blore in DuBarry Was a Lady.

Faye also originated the roles of Bernie Buchsbaum in Little Me, Detective Callahan in 70, Girls, 70 and Solly in Grind.

The Duchess Misbehaves (1946)(originated the role)

The Amazing Adele (1955)(originated the role)

Strip For Action (1956)(originated the role) 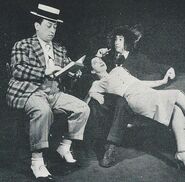 Jerry Biffle and Pinky in Top Banana.
Add a photo to this gallery
Retrieved from "https://goldenthroats.fandom.com/wiki/Joey_Faye?oldid=46318"
Community content is available under CC-BY-SA unless otherwise noted.