The Entertainer as Jean Rice (stage/film)

Joan Plowright is an English actress.

Born in Brigg, Lincolnshire, Plowright trained at the Bristol Old Vic Theatre School and made her stage debut in 1948. She appeared in a number of major plays including Saint Joan, The Entertainer (a role she would reprise for the film adaptation) and notably A Taste of Honey, for which she won a Tony Award.

In later years, she appeared in a number of film roles, such as Enchanted April (gaining Academy Award and Golden Globe nominations) as well as more humorous turns in Last Action Hero and 101 Dalmatians. She continued appearing on-stage (receiving plaudits for Absolutely (Perhaps)) and was named a Dame in 2004, before retiring from acting in 2014.

Despite an extensive film and theatrical career, Plowright only sang twice once professionally, in the play and film The Entertainer, performing the duets "When There Isn't a Girl About" and "The Boy I Love is Up in the Gallery". 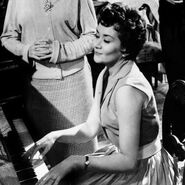 Jean Rice in The Entertainer.
Community content is available under CC-BY-SA unless otherwise noted.
Advertisement