Born in Venezuela, Corti began his acting career on television in 1968 before appearing in a number of stage roles. He then became well known as a voice actor, appearing on television in The Angry Beevers, The Batman and video games such as Resident Evil 4 and Metal Gear Solid 3.

Corti also appeared in motion pictures such as Gone in Sixty Seconds and as a Colonel in Hulk.

Corti appeared in a number of stage musicals, originating several off-Broadway roles including Jose Ensalada in El Bravo!, and most notably playing Courfeyrac in the original Broadway production of Les Misérables.

Corti also sang in two animated roles, as LeFou in Beauty and the Beast (in which he sang "Gaston") and providing the singing voice of Charlie in All Dogs Go to Heaven 2.

Lullabye and Goodnight (1982)(originated the role)

Lovers and Keepers (1986)(originated the role) 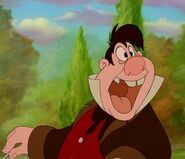 LeFou in Beauty and the Beast. 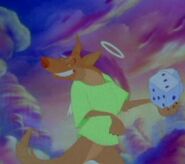 Charlie B. Barkin in All Dogs Go to Heaven 2.
Add a photo to this gallery
Retrieved from "https://goldenthroats.fandom.com/wiki/Jesse_Corti?oldid=46123"
Community content is available under CC-BY-SA unless otherwise noted.