Jennifer Tilly is an American actress.

Born Jennifer Chan in Los Angeles, California, she began acting on television, playing one Frasier Crane's love interests on Cheers (and later, as a different character in Frasier), before becoming noticed for The Fabulous Baker Boys and later gaining an Academy Award nomination for her role in Bullets Over Broadway. She also received praise for her role in Bound.

Tilly also became an active voice actress, appearing in Monsters Inc. and Family Guy (playing the perpetually pregnant Bonnie Swanson) among others, as well as appearing in Broadway plays One Shoe Off and Don't Dress for Dinner. Outside of acting, she also became known as a leading poker player, having won several tournaments.

Tilly sang in a number of films, beginning with a performance of "The Candy Man" during The Fabulous Baker Boys, followed by two duets, in Bound ((Chicago Is) My Kind of Town) and Happy End (Hunky Daddy). She also sang several lines in the Family Guy Christmas special. 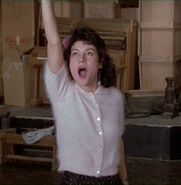 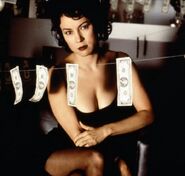 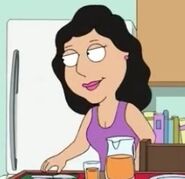 Bonnie Swanson in Family Guy.
Add a photo to this gallery
Retrieved from "https://goldenthroats.fandom.com/wiki/Jennifer_Tilly?oldid=52244"
Community content is available under CC-BY-SA unless otherwise noted.