Jean Simmons was an English actress.

Born in Lower Holloway, London, Simmons began acting at the age of 14. She junior roles in a number of films including Great Expectations and My Uncle Silas before acheiving recognition and Academy Award nomination for playing Ophelia in Laurence Olivier's Hamlet.

By 1950, Simmons was ranked the fourth most popular star in Britain, and continued to appear onscreen to great success, achieving a second Academy Award nomination in 1969 for The Happy Ending. In later life she appeared frequently on television, and worked in voiceovers, providing narration as well as later featuring in the English dub of Howl's Moving Castle.

Simmons made a number of singing appearences beginning with early on in her film career where she played a singer in The Way to the Stars. This was followed by her role as Ruth Gordon Jones in The Actress, for which she performed "My Beautiful Lady".

Simmons' largest sung role on film however was as the pious Sergeant Sarah Brown in Guys and Dolls, in which she had several numbers including the solo "If I Were a Bell". This success would later enable her be the first actress to play Desirée Armfeldt on the London stage in A Little Night Music. 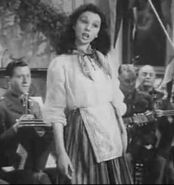 Singer in Way to the Stars. 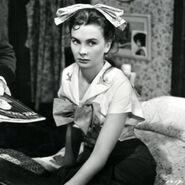 Ruth Gordon Jones in The Actress. 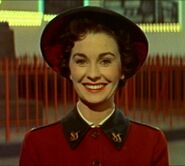 Sarah Brown in Guys and Dolls. 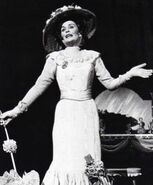 Desirée Armfeldt in A Little Night Music.
Add a photo to this gallery
Retrieved from "https://goldenthroats.fandom.com/wiki/Jean_Simmons?oldid=49903"
Community content is available under CC-BY-SA unless otherwise noted.