Jayne Wisener is an Irish actress.

Born in Ballymoney, Wisener was a member of the Music Theatre 4 Youth and trained at the Royal Scottish Academy of Music and Drama before being spotted by a talent scout, who successfully enabled her to make her motion picture debut as Johanna Barker in Sweeney Todd: The Demon Barber of Fleet Street.

After this debut, Wisener began to make several television appearances, notably in The Inbetweeners and as a major role in both 4Degrees and Nick Nickleby.

Predominantly known as a musical actress, Wisener appeared in several shows with Music Theatre 4 Youth, most notably as Eliza Doolittle in My Fair Lady.

She made her breakout role in Sweeney Todd: The Demon Barber of Fleet Street as Johanna, despite the director's removal of all but one of her character's songs, Wisener was still able to make an impact and soon afterwards appeared in the award-winning new musical Parade at the Donmar Warehouse. Wisener also played the lead role of Mary Lennox in a 2010 production of The Secret Garden. 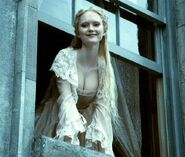 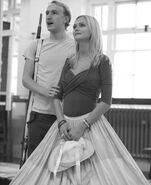 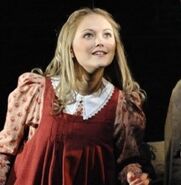 Mary Lennox in The Secret Garden.
Add a photo to this gallery
Retrieved from "https://goldenthroats.fandom.com/wiki/Jayne_Wisener?oldid=45172"
Community content is available under CC-BY-SA unless otherwise noted.