Jane Lawrence was an American actress.

Born Jane Brotherton in Bozeman, Montana, Lawrence achieved a small degree of fame on Broadway before becoming an opera singer. She was also closely linked to the Abstract Expressionist movement and was the subject of one of Jackson Pollock's paintings. She made only one film appearance in Sailor's Holiday.

Lawrence also sang the part of Elettra at the Salzburg Festival in 1951, and took part in the experimental XS: The Opera Opus in 1984. 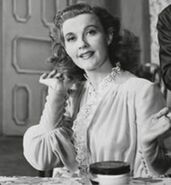