Sweeney Todd: The Demon Barber of Fleet Street as Anthony Hope
Bend It Like Beckham: The Musical as Joe (original London cast)

After his big break into films, Bower became best known for his roles in the Harry Potter and Twilight series of films. He also made recurring appearances in the television shows Camelot and the remake of The Prisoner.

Bower began his professional career with a musical role, as Anthony Hope in Tim Burton's film adaptation of Sweeney Todd: The Demon Barber of Fleet Street, after he was recommended by his friend Laura Michelle Kelly, who played Lucy.

He made his West End debut in 2015 in the stage musical adaptation of Bend It Like Beckham: The Musical. 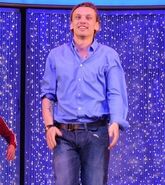 Joe in Bend It Like Beckham: The Musical.
Add a photo to this gallery
Retrieved from "https://goldenthroats.fandom.com/wiki/Jamie_Campbell_Bower?oldid=46159"
Community content is available under CC-BY-SA unless otherwise noted.