James Mitchell was an American actor and dancer.

Born in Sacramento, California, he studied drama at Los Angeles City College and made his stage debut in 1944's Bloomer Girl, the first of many collaborations with choreographer Agnes de Mille. Though best known as a dancer in musicals he also appeared in straight plays including The Deputy and The Rainmaker. He also appeared in the films Stars in My Crown and The Band Wagon and had the long-running role of Palmer Cortlandt in All My Children.

Mitchell sang in a number of stage musicals; notably originating the roles of Rocky in Billion Dollar Baby and Marco the Magnificent in Carousel. He also sang "One Alone" in Deep in My Heart and portrayed the roles of Macheath in The Threepenny Opera and Nick Arnstein in Funny Girl. 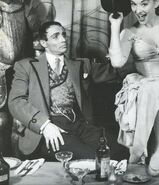 Macheath in The Threepenny Opera. 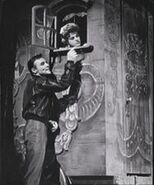 Marco the Magnificent and The Incomparable Rosalie in Carnival!
Add a photo to this gallery
Retrieved from "https://goldenthroats.fandom.com/wiki/James_Mitchell?oldid=49540"
Community content is available under CC-BY-SA unless otherwise noted.