Jack Gilford was an American actor.

Born Jacob Aaron Gellman in New York, he began his showbusiness career on stage as a comedian and impressionist, before becoming a nightclub master of ceremonies.

Though mostly recognised for his stage appearances, particular in comedy (his role as King Sextimus in Once Upon a Mattress was almost entirely pantomimed) Gilford was also a versatile character actor on television, appearing in series such as Taxi and The Golden Girls. He also made occasional film appearances and received an Academy Award nomination for his part in Save the Tiger.

Gilford often made singing appearances, beginning his career in revues such as Meet the People and Alive and Kicking. In 1962, he originated the role of Hysterium in A Funny Thing Happened on the Way to the Forum (a role which he reprised for the film adaptation). He also made several appearances on The Dean Martin Show and performed "Everybody Ought to Have a Maid" with Martin, Orson Welles and Pat Crowley.

In 1966 Gilford originated another notable role, playing the poignant part of Herr Schultz in Cabaret. His final musical would come in 1971, in the revival of No, No, Nanette as Jimmy Smith.

Once Upon a Mattress (1959)(originated the role) 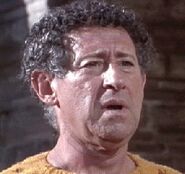 Hysterium in A Funny Thing Happened on the Way to the Forum.

Jimmy Smith in No, No, Nanette.
Add a photo to this gallery
Retrieved from "https://goldenthroats.fandom.com/wiki/Jack_Gilford?oldid=48852"
Community content is available under CC-BY-SA unless otherwise noted.