Jack Eric Williams was an American actor and conposer.

Born in Odessa, Texas, Williams made his first prominent stage appearance in Pinter's The Homecoming before making the move to Broadway itself.

Best known as a composer, Williams wrote the music for the play Galileo, and later conceived the play Mrs. Farmer's Daughter, which he wrote all the music for himself. His most successful show was 1990's Swamp Gas and Shallow Feelings: A Brand New Nashville Musical Fable, which earned him the Richard Rodgers Award from the American Academy and Institute of Arts and Letters.

In 1994, Williams went into a diabetic coma and passed away. His life and death were the subjects of a song in William Finn's Elegies.

A well known tenor who gave a performance for the King of Sweden and performed in a one man show entitled Songs and Other Devices: A Cabaret Recital (volumes 1-4), Williams made his Broadway debut in 1976 playing the Messenger and understudying the Ballad Singer in The Threepenny Opera.

His most famous accomplishment as a performer was originating the role of Beadle Bamford in Sweeney Todd: The Demon Barber of Fleet Street, a part written especially for him. When the show went on tour, his health prevented him from joining, and he handed over the role to his friend Calvin Remsberg. 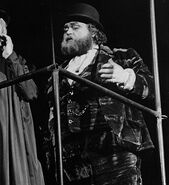 Beadle Bamford in Sweeney Todd: The Demon Barber of Fleet Street
Add a photo to this gallery
Retrieved from "https://goldenthroats.fandom.com/wiki/Jack_Eric_Williams?oldid=46288"
Community content is available under CC-BY-SA unless otherwise noted.