Ian Burford is a Scottish actor.

Born in Edinburgh, Burford trained at the Royal Academy of Dramatic Arts and appeared in a number of stage productions before appearing on Dave Allen at Large with the BBC in a regular role. He appeared in a number of classical stage role such as the Prince of Aragon/The Duke of Venice in The Merchant of Venue as well as more varied ventures including Badger in The Wind in the Willows.

In 1990, Burford played a number of different roles in the television series War of the Roses, and continued to make appearances on television, usually in guest roles. His appearance as Judge Turpin in Sweeney Todd: The Demon Barber of Fleet Street coincided with a silent role as a priest in the film adaptation.

Training as a singer shortly after receiving his acting qualifications, Burford appeared as a Cold Toddy Seller in the original cast of Pickwick and made a number of character roles in musicals throughout the Eighties, including Uncle Max in The Sound of Music, before originating the role of Don Ramon in Matador and playing both Cecil B. De Mille and Max Von Mayerling in Sunset Boulevard.

Burford also played the elder Joe in the 1997 revival of Damn Yankees, and would appear in the original cast of Mary Poppins as Admiral Boom and the Bank Manager. In 2008, he made an operatic appearance as Judge Turpin in Sweeney Todd: The Demon Barber of Fleet Street.

Joseph and the Amazing Technicolor Dreamcoat

The Sound of Music

Whistle Down the Wind 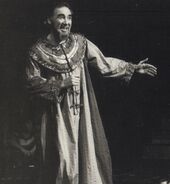 Potiphar in Joseph and the Amazing Technicolor Dreamcoat. 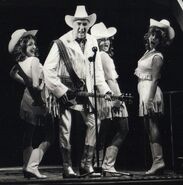 "All Rocked Out" from Dear Anyone.

Little Me.
Add a photo to this gallery
Retrieved from "https://goldenthroats.fandom.com/wiki/Ian_Burford?oldid=50076"
Community content is available under CC-BY-SA unless otherwise noted.