'Hy Hazell was an English actress.

Born Hyacinth O'Higgins in Streatham, London, she began her career as a chorus girl before making her screen debut in 1947. During the war, she frequently appeared as the principal boy in a number of pantomimes, a practice she continued for some years after.

Hazell also appeared in a number of films including The Yellow Balloon, Stolen Assignment and What Every Woman Wants.

Hazell passed away in 1970, during the run of Fiddler on the Roof.

Initially appearing in the ensemble of On Your Toes, Hazell also sang onscreen, notably performing two solos in The Forces' Sweetheart.

Onstage, Hazell originated such roles as Dixie Collins in Expresso Bongo, Catherine in Pleasures and Palaces and Kay Connor in Charlie Girl. She also appeared in No Strings, The Beggar's Opera and Fiddler on the Roof where she made her final performance playing Golde.

Lock Up Your Daughters! (1959)(originated the role)

Pleasures and Palaces (1965)(originated the role) 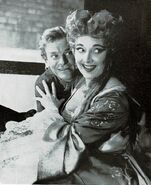 Mrs. Squeezum in Lock Up Your Daughters.
Community content is available under CC-BY-SA unless otherwise noted.