Hermione Gingold was an English actress.

Born in London, England, Gingold made her professional stage debut aged eleven, and soon became a successful child actress, appearing in the original production of Where the Rainbow Ends opposite Noël Coward. She later matured as an actress and appeared in a wide array of revues.

In her later years, Gingold appeared in numerous films and television specials, gaining a Golden Globe nomination for her role in Gigi. Her professional career came to a close after suffering an accident in Side by Side by Sondheim.

During the latter part of her career, Gingold began to perform in a number of musical roles, her original soprano giving way to a throaty purr as she appeared in specials such as The Frank Sinatra Timex Show: An Afternoon with Frank Sinatra and films such as Gigi, in which she played Madame Alvarez. But Gingold's most enduring musical role was originating Madame Armfeldt in A Little Night Music, a part she reprised for the film. 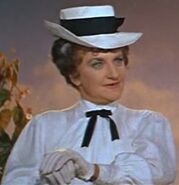 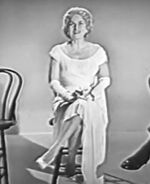 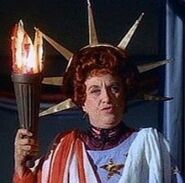 Eulalie Shinn in The Music Man.

Madame Armfeldt in A Little Night Music.
Add a photo to this gallery
Retrieved from "https://goldenthroats.fandom.com/wiki/Hermione_Gingold?oldid=48818"
Community content is available under CC-BY-SA unless otherwise noted.