Hayley Atwell is an English actress

Born in London, England, she studied at the Guildhall School of Music and Drama before taking early roles in such films as Cassandra's Dream, The Duchess and Brideshead Revisited. This would lead to roles on stage in A View From the Bridge and on television in The Prisoner and Any Human Heart.

Atwell gained global recognition for her role as Agent Peggy Carter in the Marvel Cinematic Universe, which, after playing in Captain America: The First Avenger, she would reprise for her own series, Agent Carter, amongst other films and video game cameos. She also appeared in a number of radio productions, frequently for Doctor Who, and voiced Portia in a production of The Merchant of Venice.

Atwell sang the folk song "Lavender's Blue" to her onscreen daughter in Cinderella, as well as "Whatcha Gonna Do? (It's Up to You)" in Agent Carter. 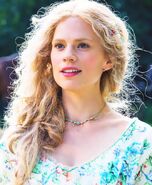 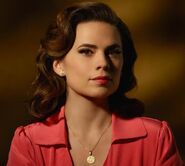