Harvey Fierstein is an American actor and writer.

Born in Brooklyn, New York, Fierstein began as a stand-up comedian and female impersonator before becoming known as a playwright, devising The Torch Song Trilogy and La Cage Aux Folles. He also wrote the books for stage musicals Newsies and Kinky Boots.

Fierstein made his debut onstage and later his film debut in 1984's Garbo Talks, going on to appear in such films as Bullets Over Broadway, Death to Smoochy and the adaptation of his own play The Torch Song Trilogy. He also appeared as a voice actor on numerous occasions, including making guest appearances on The Simpsons and Family Guy.

Fierstein initially sang on a few occasions onscreen, notably in his role as Yao in the Mulan series, before becoming known for stage roles due to his role as Edna Turnblad in Hairspray.

Fierstein's stage successes would include playing Tevye in Fiddler on the Roof and Uncle Winston in his own piece A Catered Affair as well as playing Albin in a 2011 production of La Cage Aux Folles.

A Catered Affair (2008)(originated the role) 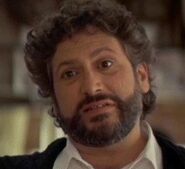 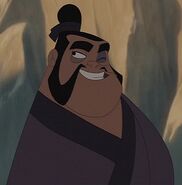 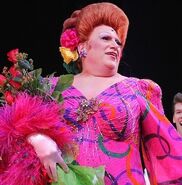 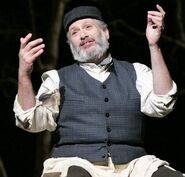 Heat Miser in The Year Without a Santa Claus. 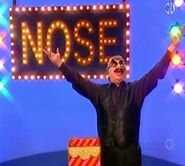 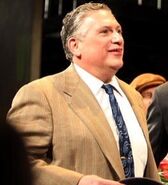 Uncle Winston in A Catered Affair. 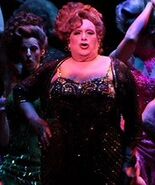 Zaza in La Cage Aux Folles.
Add a photo to this gallery
Retrieved from "https://goldenthroats.fandom.com/wiki/Harvey_Fierstein?oldid=46326"
Community content is available under CC-BY-SA unless otherwise noted.