Harrison Ford is an American actor.

Born in Chicago, Illinois, Ford began attempting to gain a career on radio and with voiceovers before his first uncredited film role in 1966. He continued to work in television and as a carpenter, before securing his star-making role as Han Solo in the Star Wars trilogy and the equally popular Indiana Jones series, in which he played the titular lead.

The popularity of these films propelled Ford to stardom, causing him to appear in a wide range of films including science fiction drama Blade Runner (and its sequel several decades later), chase thriller The Fugitive and chiller What Lies Beneath.

Despite his extended career, Ford has only sung once onscreen, singing "What a Wonderful World" in the film Witness. 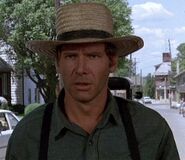 John Book in Witness.
Add a photo to this gallery
Retrieved from "https://goldenthroats.fandom.com/wiki/Harrison_Ford?oldid=46341"
Community content is available under CC-BY-SA unless otherwise noted.