Waiting for God as Tom Ballard

Graham Crowden was a Scottish actor.

Born Clement Graham Crowden in Edinburgh, Scotland, he served in the Royal Scots Youth Battalion before becoming an established theatrical performer, appearing in such plays as Rosencrantz and Guildenstern Are Dead and making his film debut in 1964.

Though he appeared in films including Up the Chastity Belt, The Amazing Mr. Blunden, The Final Programme and For Your Eyes Only, Crowden was best known for his television roles, playing the male lead in Waiting for God and making guest appearances in Porridge, Doctor Who (having turned down the lead role) and Midsomer Murders amongst others. He also provided the voice of Mustrum Ridcully in Soul Music.

Crowden only sang in one role, as Tom Ballard in Waiting for God; performing sections of such songs as "Good Vibrations" and "Get Me to the Church on Time." 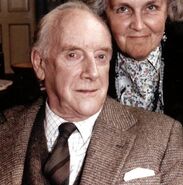 Tom Ballard in Waiting for God.
Add a photo to this gallery
Retrieved from "https://goldenthroats.fandom.com/wiki/Graham_Crowden?oldid=52675"
Community content is available under CC-BY-SA unless otherwise noted.