Gertrude Lawrence was an English actress.

Lawrence would continue to work in straight plays including Candle Light and Private Lives, as well as touring on behalf of the E.N.S.A. during the Second World War. In 1950, she appeared in The Glass Menagerie, as well as her greatest success as Anna Leonowens in The King and I.

Lawrence first began singing in André Charlot's revues before portraying Kay Jones in the original Broadway cast of Oh, Kay! She also performed the title song in "They All in Love."

Lawrence would also originate roles in Nymph Errant, Lady in the Dark and most notably The King and I. 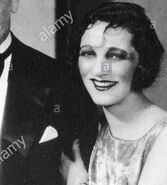 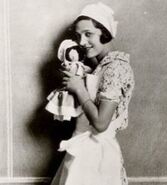 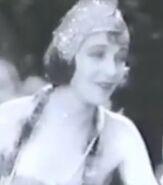 Georgie in They All Fall in Love. 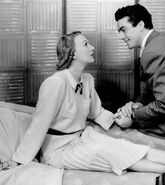 Liza Elliott in Lady in the Dark. 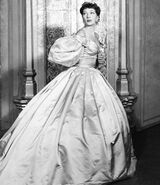 Anna Leonowens in The King and I.
Add a photo to this gallery
Retrieved from "https://goldenthroats.fandom.com/wiki/Gertrude_Lawrence?oldid=45014"
Community content is available under CC-BY-SA unless otherwise noted.