Gert Fröbe was a German actor.

Born Karl Gerhardt Fröbe in Oberplanitz, Saxony, he initially worked as a violinist before moving into Kabarett. After being drafted into the German Army during World War II, he began to make appearances in German films such as The Eternal Waltz and It Happened in Broad Daylight.

His role in the latter led to Fröbe's casting as the titular villain in Goldfinger, bringing him international recognition. He then appeared in a number of films in the West usually playing exaggerated Germanic villains, such as in Is Paris Burning? and Those Magnificent Men in Their Flying Machines.

Fröbe sang in a number of films, typically in his native German, the most notable being as J.J. Peachum in The Threepenny Opera. He also sang in English whilst playing the bombastic Baron Bomburst in Chitty Chitty Bang Bang. 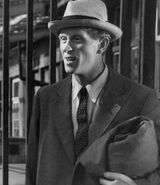 Otto Normalverbraucher in The Berliner. 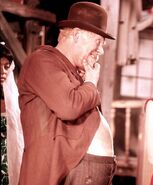 J.J. Peachum in The Threepenny Opera. 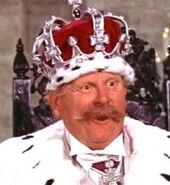 Baron Bomburst in Chitty Chitty Bang Bang.
Add a photo to this gallery
Retrieved from "https://goldenthroats.fandom.com/wiki/Gert_Fröbe?oldid=49187"
Community content is available under CC-BY-SA unless otherwise noted.