Born in St. Petersburg, Sanders and his family moved to England shortly before the Russian Revolution. Encouraged to act by a young Greer Garson, he first became noticed for his role as the evil fop Lord Everett Stacy in Lloyd's of London, a role that would typified the rest of his career, playing similar parts in Rebecca and The Picture of Dorian Gray, as well as giving an Academy Award winning performance as the acerbic critic Addison De Witt in All About Eve.

Later, Sanders began appearing in more comic productions, such as A Shot in the Dark with Peter Sellers, as well as voicing the sinister Shere Khan in The Jungle Book. He was also known for his roles in the series of films The Falcon and The Saint respectively.

Having trained to become a bass in the hopes of securing the lead in South Pacific (a part which he was given but dropped out of due to nerves), Sanders released a solo album entitled The George Sanders Touch: Songs for the Lovely Lady (which includes "Such Is My Love" a piece of his own composition) and could also be heard on the So Rare collection, Barry Humphries' collection of his favourite gramophone records. He made a number of on-screen singing appearances, most notably as General Cosmo Constantine in the film adaptation of Call Me Madam.

Songs For the Lovely Lady: The George Sanders Touch (1958) 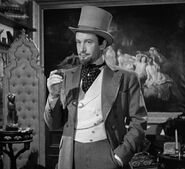 Lord Henry Wotton in The Picture of Dorian Gray. 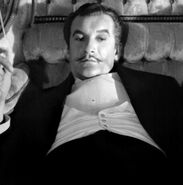 Georges Duroy in The Private Affairs of Bel Ami. 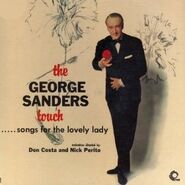 The George Sanders Touch: Songs for the Lovely Lady