George Hearn is an American actor.

Born in St. Louis, Missouri, Hearn studied philosophy before training with an acting coach and embarking on a career in the theatre. His initially successes supporting roles in Shakespeare plays until he discovered his niche in musical theatre.

Despite becoming recognised for his musical work, Hearn remained a popular straight theatre actor and received a Tony Award nomination for his role in The Life of Anne Frank. He also appeared onscreen several times; with former costar and friend Angela Lansbury in Murder, She Wrote, and in Clint Eastwood's war picture Flags of Our Fathers.

Hearn played his first musical role as Sir Dinadan in the US touring production of Camelot, and received positive notices for his roles as John Dickinson in 1776 and Papa in the new musical I Remember Mama, based on the stage play of the same name.

However, Hearn first gained major recognition when he took over the leading role in Sweeney Todd: The Demon Barber of Fleet Street, gaining him critical acclaim and a lifelong link with the role, which he would perform on tour and in concert in 2003. His next role was in major flop A Doll's Life, but following this won a Tony Award for his portrayal of Albin/Zaza in La Cage Aux Folles.

Hearn later originated the role of Alonzo Smith in Meet Me in St. Louis and won a second Tony for his role as Max Von Mayerling in Sunset Boulevard. He provided the voice of the demon Red in All Dogs Go to Heaven 2 and twice portrayed the Wizard of Oz in Wicked.

In 2012, Hearn appeared in the dual role of James Kennedy/Brother Bob in Scandalous. 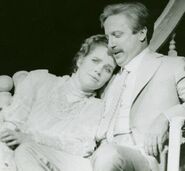 Papa with Mama in I Remember Mama. 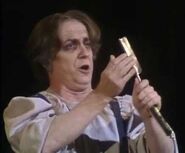 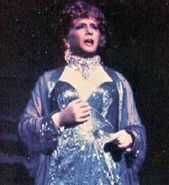 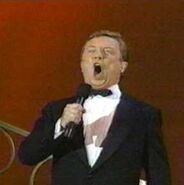 Red in All Dogs Go to Heaven 2. 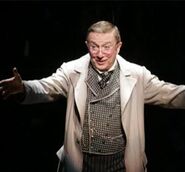 The Wizard in Wicked.
Add a photo to this gallery
Retrieved from "https://goldenthroats.fandom.com/wiki/George_Hearn?oldid=53702"
Community content is available under CC-BY-SA unless otherwise noted.