Geoffrey Palmer was an English actor.

Born in London, England, Palmer became interested in the theatre after a military career, working in repertory theatre before a television debut in 1958. He gained attention for his featured roles in such television series as The Fall and Rise of Reginald Perrin, Butterflies and As Time Goes By.

Palmer appeared in a number of films including The Madness of King George, Tomorrow Never Dies and Anna and the King. He also made use of his deep, deadpan voice when he frequently performed on radio and contributed to several audiobooks. 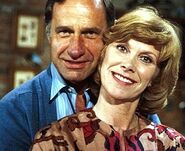 Ben and Ria Parkinson in Butterflies.
Add a photo to this gallery
Retrieved from "https://goldenthroats.fandom.com/wiki/Geoffrey_Palmer?oldid=53422"
Community content is available under CC-BY-SA unless otherwise noted.