Geoffrey Blaisdell is an American actor.

A stage actor, Blaisdell made the majority of his appearances in musicals, but also played in straight plays such as the 1999 revival of Amadeus.

A veteran of numerous stage musicals, Blaisdell appeared with the Broadway tour of Les Misérables, initially playing Montparnasse before later going on to play Javert.

He would also go on to originate the role of Captain De Castel Jaloux in Cyrano: The Musical and appeared in the Broadway run of Jekyll & Hyde as General Lord Glossop. 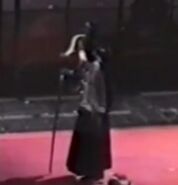