Gene Barry was an American actor.

Born Eugene Klass in New York City, he studied at the Chatham School of Music and began his career as a song and dance man, appearing in a number of stage musicals. He made his first film appearances in The Atomic City and The War of the Worlds and later played roles in Back From Eternity and The 27th Day.

Barry's main claim to fame came through television, playing the title characters in Bat Masterson and Burke's Law. He also made apoearances in The Name of the Game and The Adventurer.

Though he gained fame as a film actor, Barry sang a number of times onstage, making his musical debut as Captain Duval in The New Moon and later playing such roles as The Doctor in Happy as Larry, Destry in Destry Rides Again and Tevye in Fiddler on the Roof. He also originated the roles of Jack Beaumont in Spotlight and famously the Tony Award nominated role of Georges in La Cage Aux Folles. 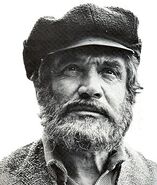 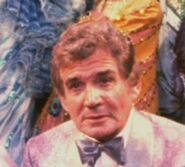 Georges in La Cage Aux Folles.
Add a photo to this gallery
Retrieved from "https://goldenthroats.fandom.com/wiki/Gene_Barry?oldid=48583"
Community content is available under CC-BY-SA unless otherwise noted.