Frank Gorshin was an American actor.

Born Frank Gorshin Jr. in Pittsburgh, Pennsylvania, he became an impressionist and studied at the Carnegie Tech School of Drama, becoming a film and television actor following the Second World War as well as making a number of appearances on The Ed Sullivan Show as a comedian and impressionist.

Gorshin soon made his film debut in Between Heaven and Hell and went on to play a number of "heavies" before being cast as the cunning Riddler in the 1960s Batman series. He also appeared in the original Star Trek series, Hawaii Five-O and Buck Rogers in the 25th Century as well as such films as Twelve Monkeys.

Gorshin appeared on a number of variety shows, including a singing appearance on Perry Como's Kraft Music Hall as well as releasing his own single Never Let Her Go.

Gorshin also appeared in a number of stage musicals, namely What Makes Sammy Run?, the original cast of Jimmy (playing Jimmy Walker), Promises, Promises and On the Twentieth Century as Oscar Jaffee. 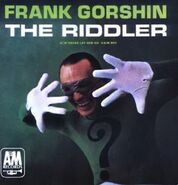 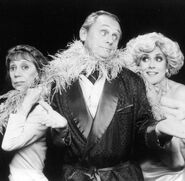 Oscar Jaffee in On the Twentieth Century. 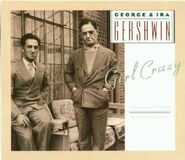 Girl Crazy.
Add a photo to this gallery
Retrieved from "https://goldenthroats.fandom.com/wiki/Frank_Gorshin?oldid=50084"
Community content is available under CC-BY-SA unless otherwise noted.