Eva Gabor was a Hungarian actress.

Born in Budapest, Hungary, Eva was the eldest of the three Gabor sisters, who were well known as socialites and for their multiple marriages. Eva made her film debut in 1941, and played a number of bit roles in film and television, as well as having a series of her own, The Eva Gabor Show. In 1965 she appeared in the show Green Acres, where she played the role of Lisa Douglas for four series.

Gabor also provided a number of voices for Disney, playing Duchess in The Aristocats and Miss Bianca in The Rescuers, and launched an eponymous fashion line.

Gabor's sultry voice was lent to a handful of screen and stage productions, including the musical play Tovarich. She also memorably duetted on the theme tune for Green Acres. 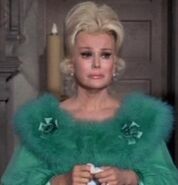 Duchess in The Aristocats. 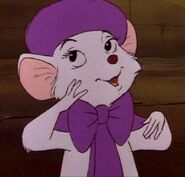 Miss Bianca in The Rescuers.
Community content is available under CC-BY-SA unless otherwise noted.