Alive and Kicking as Mabel

Estelle Winwood was an English actress.

Born in Lee, Kent as Estelle Ruth Goodwin, she decided to be an actress from the age of five and trained at the Lyric Stage Academy, before making her professional debut aged twenty. Initially working in repertory theatre, Winwood moved onto the West End and later Broadway, where, as well as performing, she also directed a production of The Importance of Being Earnest.

Whilst initially disliking film, she soon made several appearances including in Camelot and The Producers before becoming popular as a television actress as well.

Winwood continued to act well into old age, making her final film appearance aged ninety-two, and upon her death in 1984, becoming the oldest member of the Screen Actors Guild.

Despite her long career, Winwood had only one singing role; raucously singing "What Shall We Do With the Drunken Sailor?" as she and her elderly friends escape in a speedboat. 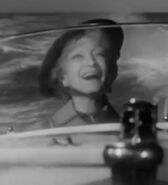 Mabel in Alive and Kicking.
Add a photo to this gallery
Retrieved from "https://goldenthroats.fandom.com/wiki/Estelle_Winwood?oldid=48732"
Community content is available under CC-BY-SA unless otherwise noted.