Errol Flynn was an Australian actor.

Born in Battery Point, Tasmania, Flynn made his screen debut as Fletcher Christian in 1933's In the Wake of the Bounty and was a stage actor with the Northampton Rep before his star-making lead role in Captain Blood, the first in a series of swashbuckling adventure pictures which would include The Adventures of Robin Hood and The Charge of the Light Brigade.

Flynn occasionally appeared in more heavyweight acting works, such as The Private Lives of Elizabeth and Essex and even published a successful novel; Showdown. However, his film career began to decline along with his physical appearance in the 1940s.

Flynn sang occasionally onscreen, first, briefly joining his costars in "Plum and Apple" in The Dawn Patrol but to a greater extent in Thank Your Lucky Stars, where he performed as himself.

Flynn also performed the duet "Reckon I'm In Love" in Montana and the sea shanty "Haul on the Bowline" in Against All Flags. 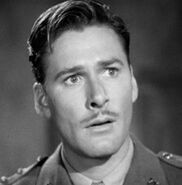 Courtney in The Dawn Patrol. 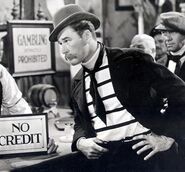 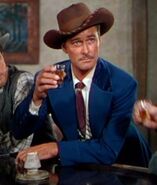 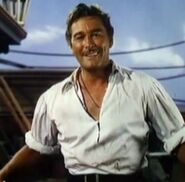 Brian Hawke in Against All Flags.
Add a photo to this gallery
Retrieved from "https://goldenthroats.fandom.com/wiki/Errol_Flynn?oldid=46336"
Community content is available under CC-BY-SA unless otherwise noted.