Ernest Borgnine was an American actor.

Born Ermes Borgnino in Hamden, Connecticut, he was a United States Navy officer before taking an internship at the Barter Theatre and making his stage debut in State of the Union. After a number of screen appearance, he gained his big break in From Here to Eternity, leading to a number of villainous roles in Johnny Guitar and Vera Cruz amongst others, and an Academy Award in 1955 for Marty.

Borgnine also gained recognition for his television appearances, such as Lieutenant McHale in McHale's Navy and Dominic Santini in Airwolf and ensemble action films such as The Dirty Dozen and Flight of the Phoenix. He would continue to act for the rest of his life, often as a voice actor (expressing particular affection for his role as Mermaid Man in SpongeBob SquarePants) and in cameos sending up his former persona.

Borgnine lent his gruff tone to a number of singing roles towards the end of his career, notably in three different installments of the All Dogs Go to Heaven series (in which he played Carface Carruthers following the death of Vic Tayback) singing the solo "Puppyhood" in the finale An All Dogs Christmas Carol. He also sang "I'm Too Sexy" in the sports comedy BASEketball. 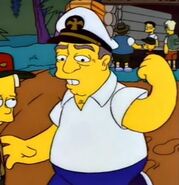 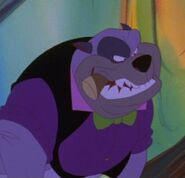 Carface Carruthers in All Dogs Go to Heaven 2.