The Vicar of Dibley as Alice Tinker

Emma Chambers was an English actress.

Born in Doncaster, Yorkshire, she studied at the Webber Douglas Academy of Dramatic Arts before appearing in the 1994 dramatisation of Martin Chuzzlewit and taking on the long-running role of sweet but dim Alice Tinker in The Vicar of Dibley, for she won a British Comedy Award.

Chambers also appeared in the series' How Do You Want Me? and Take a Girl as well as the films Notting Hill and The Wind in the Willows (the latter a voice role).

Chambers sang briefly in her best known role as Alice in The Vicar of Dibley; singing "My Favourite Things." 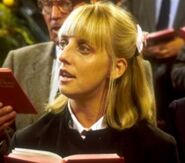 Alice Tinker in The Vicar of Dibley.
Add a photo to this gallery
Retrieved from "https://goldenthroats.fandom.com/wiki/Emma_Chambers?oldid=44836"
Community content is available under CC-BY-SA unless otherwise noted.