Emily Zacharias is an American actress.

As well as her numerous stage credits, Zacharias would appear in the short film Brothers as welling as making a guest appearance on Law and Order.

Zacharias appeared in a number of musical theatre roles, including that of Hodel in Fiddler on the Roof. She would return to the play in 2012 to play Hodel's mother Golde.

Zacharias also originated the role of Alcmene in Olympus on My Mind, and was the first actress to play Lady Beaconsfield in Jekyll & Hyde. In 2003 she originated another role, that of Camille Penza in Romeo and Bernadette.

The Apprenticeship of Duddy Kravitz (1986)

Romeo and Bernadette (2003)(originated the role) 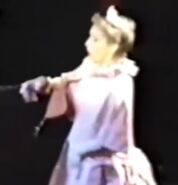 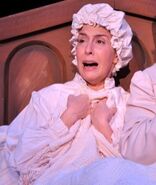 Golde in Fiddler on the Roof.
Add a photo to this gallery
Retrieved from "https://goldenthroats.fandom.com/wiki/Emily_Zacharias?oldid=45173"
Community content is available under CC-BY-SA unless otherwise noted.