Fiddler on the Roof as Tzeitel
Rachael Lily Rosenbloom (And Don't You Ever Forget It) as Rachael
The Threepenny Opera as Jenny Diver
Funny Face as June
Wake Up, It's Time to Go to Bed as Eurydice (original cast)
They're Playing Our Song as Sonia
The Little Prince and the Aviator as Suzanne (original Broadway cast)
Little Shop of Horrors as Audrey (original cast/original London cast/film)
Weird Romance as P. Burke/Nola Granville (original cast)
Rock-a-Doodle as Goldie
Guys and Dolls as Miss Adelaide
Betwixt! as The Princess/The Nymph Queen/The Enchantress

Ellen Greene is an American actress.

Born in Brooklyn, New York, she attended Cewjin Camps where she first began to perform in musicals, before becoming a nightclub singer and cabaret artist. Here she caught the attention of various producers, including Joseph Papp, who cast her in a number of roles, and Paul Mazursky, who got her a first major role in a film; Next Stop, Greenwich Village. She would have a number of film appearances after this, including Leon and The Cooler. She also made appearances in a number of television programmes, including voices in Out of Jimmy's Head and Vivian Charles in Pushing Daisies.

However it was on stage that Greene had her greatest successes, most famously creating the role of Audrey in Little Shop of Horrors (which she reprised for the film) and a number of off-Broadway plays.

Greene had an extensive singing career, both on stage and screen, notably gaining her first lead in Rachael Lily Rosenbloom (And Don't You Ever Forget It), which unfortunately closed before its official opening. Her next venture was more successful, playing Jenny Diver in the 1976 revival of The Threepenny Opera, earning her a Tony Award nomination.

Greene later originated a number of roles in minor productions (Wake Up, It's Time to Go to Bed, The Little Prince and the Aviator) and most famously that of Audrey in Little Shop of Horrors. She also released an album in 2004 entitled In His Eyes and played Miss Adelaide in a live concert version of Guys and Dolls.

The Little Prince and the Aviator (1982)(originated the role) 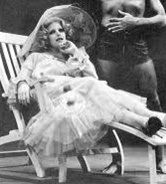 Rachael in Rachael Lily Rosenbloom (And Don't You Ever Forget It).

Eurydice in Wake Up, It's Time to Go to Bed.

Audrey in Little Shop of Horrors. 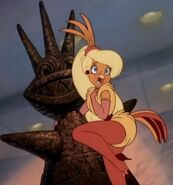 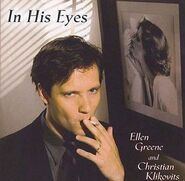 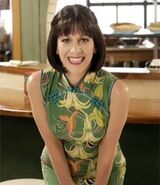 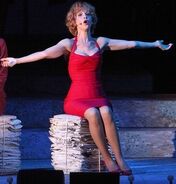 Miss Adelaide in Guys and Dolls. 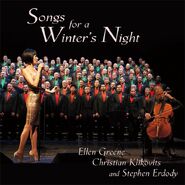 Song's For a Winter's Night.
Add a photo to this gallery
Retrieved from "https://goldenthroats.fandom.com/wiki/Ellen_Greene?oldid=44928"
Community content is available under CC-BY-SA unless otherwise noted.