Eleanor Parker was an American actress.

Born in Cedarville, Ohio, Parker appeared in plays from a young age and began appearing at the Pasadena Playhouse before her feature film debut in 1942's Soldiers in White. She soon appeared in such films as Between Two Worlds and Of Human Bondage, gaining a big break in Pride of the Marines and Academy Award nomination for Caged.

Parker would appear in a variety of films in her films, from swashbucklers (Scaramouche) and musicals (The Sound of Music) to dramas (Detective Story and Interrupted Melody) which earned her further Academy Award nominations. She also earned an Emmy Award nomination for a television appearance in The Eleventh Hour.

Parker sang during her appearance as Dame Brinker in the 1969 film Hans Brinker, as well as in tours of the stage musicals Applause and Pal Joey respectively. 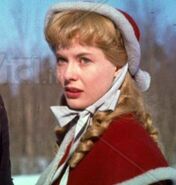