Edmund Lyndeck was an American actor.

Born in Bayonne, New Jersey, Lyndeck became a performer at a young age, becoming a versatile character actor who notably played three seperate roles in an Off-Broadway production of Around the World in Eighty Days in 1964.

Whilst his primary medium was theatre, Lyndeck made several onscreen appearances, comedies such as Road Trip and Big Daddy and numerous guest roles on television.

Making his start in regional theatre, Lyndeck made his Broadway debut in the non-singing role of Reverend John Witherspoon in 1776 before understudying and moving up to playing several other larger roles. He became most famous however for his role as the antagonistic Judge Turpin in the original production of Sweeney Todd: The Demon Barber of Fleet Street, a role he continued to play in the ensuing tour and its respective video.

Lyndeck would later star with Sweeney costar Betsy Joslyn in A Doll's Life, and later worked with Stephen Sondheim again for the original production of Into the Woods. In 1982, he originated the role of "Wizard" in the musical Merlin. 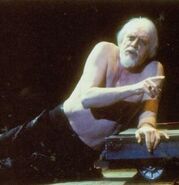 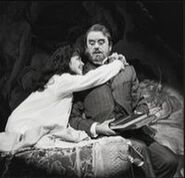 Eric and Nora in A Doll's Life. 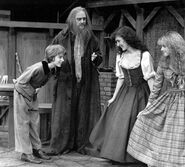 Fagin with Oliver, Nancy and Bet in Oliver!.

Cinderella's Father in Into the Woods. 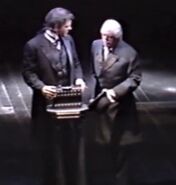 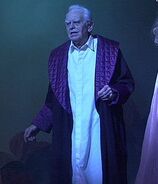 Ebenezer Scrooge in A Musical Christmas Carol.
Add a photo to this gallery
Retrieved from "https://goldenthroats.fandom.com/wiki/Edmund_Lyndeck?oldid=52089"
Community content is available under CC-BY-SA unless otherwise noted.