Romance & Cigarettes as Father Gene Vincent
Across the Universe as Mr. Kite
What About Dick? as Deepak Obi Ben Kingsley

Circle
Across the Universe (film soundtrack)
What About Dick? (original cast recording)

Born in Colony of Aden, Izzard's family moved to Britain where he soon decided to become an actor, comedian and transvestite. Performing stand up across England, he made both his professional stage debut and first major filmed gig in 1994. He performed a number of filmed shows as well as appearing in motion pictures such as Velvet Goldmine, Shadow of the Vampire and television series including Tales from the Crypt and Hannibal. He received a Tony nomination for his performance in A Day in the Death of Joe Egg.

Izzard also provided a number of voices, including Sir Miles Axelrod in Cars 2 and Reepicheep in Prince Caspian. He also became a prominent political activist, campaigning with Labour in 2015, and a marathon runner, covering 43 marathons in 51 days.

Izzard's style of delivery at stand-up shows often includes, patters of music, notably when describing how whale song sounds to other whales (seeing whales as "DJs of the Sea") in Circle.

He has sung more substantially in character, speak-singing The Beatles' "Being for the Benefit of Mr. Kite" in Across the Universe and appearing in the improvisational musical What About Dick? as Deepak Obi Ben Kingsley. 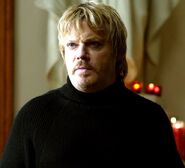 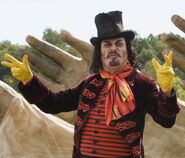 Mr. Kite in Across the Universe. 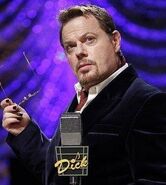 Deepak Obi Ben Kingsley in What About Dick?
Add a photo to this gallery
Retrieved from "https://goldenthroats.fandom.com/wiki/Eddie_Izzard?oldid=46600"
Community content is available under CC-BY-SA unless otherwise noted.