Douglas Seale was an English actor.

Born in London, England, Seale trained at the Royal Academy of Dramatic Arts and made his stage debut in 1934, appearing in such plays as The Drum Begins and Queen of Scots. He then moved into directing, with productions including The Comedy of Errors, A Month in the Country and Henry VI: Part III.

Seale also appeared in a number of films, including Amadeus and Ernest Saves Christmas, as well as providing the voices of Krebbs in The Rescuers Down Under, Malcolm in Phantasmagoria and The Sultan in Aladdin.

Seale originated the role of Sir Michael Audley in his self-directed and penned production of Lady Audley's Secret, as well as singing "Jingle Bells" on an episode of Amazing Stories and "Scantily Lace" with the cast of Rags to Riches. 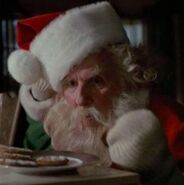 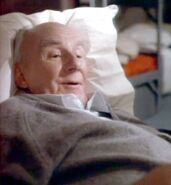 John Clapper in Rags to Riches.
Add a photo to this gallery
Retrieved from "https://goldenthroats.fandom.com/wiki/Douglas_Seale?oldid=48178"
Community content is available under CC-BY-SA unless otherwise noted.