Don Messick was an American actor.

Born in Buffalo, New York, Messick initially planned to work as a ventriloquist before gaining his big break on radio as the titular character in The Raggedy Andy Show. When Bill Thompson was on active service during the Second World War, Messick took over as the voice of Droopy, and made his first major foray into animation, which would continue with such programs as Yogi Bear (as Boo-Boo and Ranger Smith) and The Jetsons (as Astro).

However it was in 1969 that Messick would first play his most enduring role, Scooby-Doo, who he would play for several decades. Messick would also work in animated films including The Hobbit and The Last Unicorn, but it was in television that he would remain famous, playing Spot the Cat in Hong-Kong Phooey and Papa Smurf in The Smurfs.

Messick worked steadily until his death in 1997.

Messick's voice over work sometimes relied on his singing abilities, and his singing voice can be heard in several productions, beginning with The Hobbit in 1977, where he plays several characters, including Balin the dwarf.

Messick's role of Scooby-Doo would also offer him occasions to sing, in the television movie Scooby-Doo Goes Hollywood and The 13 Ghosts of Scooby-Doo. He also sang as his regular character Hamton J. Pig in Tiny Toon Adventures. 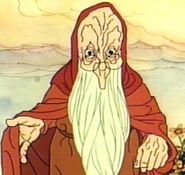 Balin in The Hobbit. 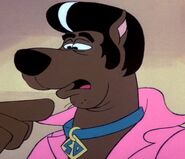 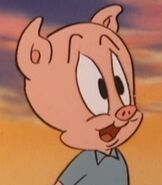