Diana Dors was an English actress.

Born Diana Fluck in Swindon, Wiltshire, she became the youngest ever student to be accepted at the London Academy of Music and Dramatic Arts. She made her screen debut in The Shop at Sly Corner and her first lead in Diamond City.

As she continued to appear onscreen, Dors gained a reputation as a British sex symbol, appearing in such films as The Last Page and The Unholy Wife, featuring as a cabaret and television star as well as appearing against type as the gruesome Mrs Wickens in The Amazing Mr. Blunden.

Dors sang onscreen on three occasions; performing the "Hokey Pokey Polka" in As Long as They're Happy, "Just One of Those Things" on The Alfred Hitchcock Hour and the theme song "His Name is Galaxy" in Confessions from the David Galaxy Affair.

Confessions from the David Galaxy Affair (1979) 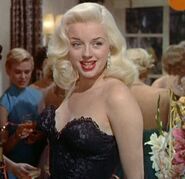 Pearl Delaney in As Long as They're Happy. 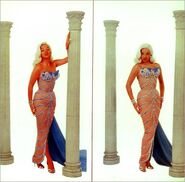 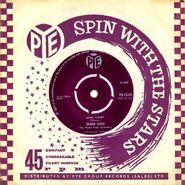 April Heart.
Add a photo to this gallery
Retrieved from "https://goldenthroats.fandom.com/wiki/Diana_Dors?oldid=49999"
Community content is available under CC-BY-SA unless otherwise noted.