My Fair Lady as Alfred Doolittle
DuBarry Was a Lady as King Louis
A Funny Thing Happened on the Way to the Forum as Pseudolus
H.M.S. Pinafore as Sir Joseph Porter
Wicked as The Wizard
The Fairy Queen as the Drunken Poet
A Damsel in Distress as Keggs (originated the role)

DuBarry Was a Lady

Desmond Barrit is a Welsh actor.

Born in Morriston in Swansea, Wales, he made his start as a stage actor in the repertory company at Swansea's Grand Theatre before making numerous appearances with the Royal Shakespeare Company (winning an Olivier Award for The Comedy of Errors and a further nomination for his Falstaff in Henry IV Parts I and II). He also received plaudits for his role as Hector in The History Boys. In 2008 he turned his hand to directing, casting former Wicked castmate Caroline Keiff in his production of The Rise and Fall of Little Voice in Sheringham.

Barrit has also made occasional appearances on television, notably as Humpty Dumpty in the 1998 adaptation of Alice Through the Looking Glass and as The Ghost of Christmas Present in A Christmas Carol with Patrick Stewart.

Though predominantly known as a Shakesperian and straight play actor, Barrit has made several singing appearances, frequently in comic or character roles. The first was in 1997, where he played Alfred Doolittle in a concert containing selections from My Fair Lady.

He played the leading roles in both DuBarry Was a Lady in the 2001 concert and A Funny Thing Happened on the Way to the Forum, before playing the role of Sir Joseph Porter in H.M.S. Pinafore in 2005.

In 2008, Barrit took on his highest profile musical role, that of the Wizard of Oz in the West End production of Wicked, which he would return to in 2011. He would also appear in the duel speaking/singing role of Nick Bottom/The Drunken Poet in The Fairy Queen and originated the role of the butler Keggs in A Damsel in Distress.

A Damsel in Distress (2015)(originated the role)

(The Jolly Milkmaid and the Tar (contains solo lines) 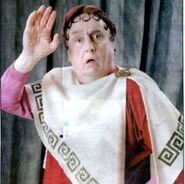 Pseudolus in A Funny Thing Happened on the Way to the Forum.

The Wizard in Wicked.

The Drunken Poet/Nick Bottom in The Fairy Queen.

Keggs in A Damsel in Distress.
Add a photo to this gallery
Retrieved from "https://goldenthroats.fandom.com/wiki/Desmond_Barrit?oldid=48581"
Community content is available under CC-BY-SA unless otherwise noted.